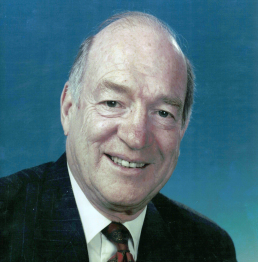 Church, Robert George (1936-2022)
Robert George Church passed away, after a brief illness, at Headwaters Health Care Centre in Orangeville on Wednesday, June 8, 2022. Robert, also known as Bob, Archie, Dad, Grandpa and Gramps, was 86. Husband to late wife Marilyn Church (1966-1970), and Ida Church (1977-2019). He is survived by his children, grandchildren and great-grandchildren.

A 7-year university hockey player while graduating from the University of Toronto and Osgoode Hall, Bob was called to the bar in 1963 and received his honorary title of Queen's Counsel, or QC, which is used to recognize Canadian lawyers for exceptional merit and contribution to the legal profession, in 1978. He would go on to serve the Orangeville community as a lawyer for over 60 years. With a passion for contribution, Bob served as a Major in the Royal Canadian Air Force Reserves - flying his beloved Harvard and Otter. His passion for aviation propelled him to serve as the longstanding President and Chairman of the Canadian International Airshow in Toronto. In continued service, Bob served as the Chairman for the Headwaters Health Care Centre and was instrumental in bringing a new hospital to the Orangeville community.

Passionate about Canada, politics, travelling, history, reading and classical/jazz music - and most of all his family and friends. We’ll miss Bob’s passionate convictions and contribution.

Cremation has taken place.
A Memorial Visitation will be held at Dods & McNair Funeral Home, Chapel & Reception Centre on Wednesday, June 15, 2022 from 2:00 - 4:00 p.m. with Words of Remembrance at 3:00 p.m.
Memorial Donations, in lieu of flowers may be made to the Canadian Cancer Society.

A tree will be planted in memory of Robert in the Dods & McNair Memorial Forest at the Island Lake Conservation Area, Orangeville. 20th Annual Dedication Service will be held on Sunday, September 11, 2022 at 2:00 p.m.
Condolences may be offered to the family at www.dodsandmcnair.com