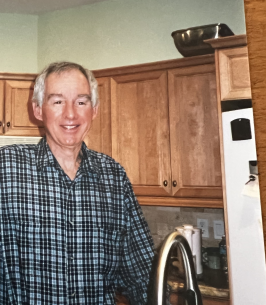 Nelson, Murray Hugh
Peacefully at Bethell Hospice on Friday April 22, 2022 at the age of 76. Beloved husband of 52 years to Ruth Nelson (Fink). Loving father of Pamela Brooks (Simon) and David (Jennifer). Cherished Grampa of Mackenzie and Stephanie. Remembered by his brothers Fraser (Janet) and Bruce (Anna).

Raised in Caledon East with a large extended family (23 first cousins!), Hugh worked with his dad and brothers at their garage. He graduated with a Bachelor of Science in Engineering, Civil, Water Resources from the University of Guelph in 1968.

Hugh started working with government in Alberta, met his wife Ruth on vacation in Jamaica and married her in 1969. He raised his family in Lethbridge, established his first business, played hockey and tennis, enjoyed camping, hiking and skiing in the Rockies.

The family moved back to Ontario in 1987 where Hugh redesigned dams on the Trent-Severn and lead multiple municipal projects. Hugh and Ruth travelled extensively during this time.

Hugh finished his career as a consultant with EXP in Brampton in 2017. In his retirement, Hugh enjoyed
winters in Arizona, volunteering with Mayfield United Church, the Providence Cemetery and Habitat for Humanity.

Hugh believed in service to others.

Visitation will be held at the Dods & McNair Funeral Home, Chapel & Reception Centre, 21 First St., Orangeville on Friday, April 29, 2022 from 2:00 - 4:00 & 7:00 - 9:00 p.m.
Memorial donations in lieu of flowers may be made to Providence Cemetery, Mayfield United Church or the Canadian Cancer Society-Wheels of Hope would be appreciated by the family.

A tree will be planted in memory of Hugh in the Dods & McNair Memorial Forest at the Island Lake Conservation Area, Orangeville.
Condolences may be offered to the family at www.dodsandmcnair.com