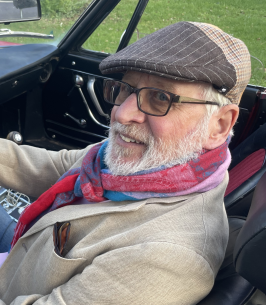 Born in Chicago, John immigrated to Canada in 1968 due to his opposition to the war in Vietnam. He and Barbara Felts married in 1968, and moved with their two daughters to Caledon East in 1972 where their son was later born.

John shared his love of sports, music, literature, cinema, horse racing and dance with everyone he met. It formed the basis of connections that developed into many deep, lasting friendships.

He was a mentor, a confidant, a person who shared many pleasures with everyone he met. He was a proud grad of the University of Notre Dame, and a dedicated supporter of Notre Dame football. He proudly celebrated his Hungarian heritage, and passed it on to his children and grandchildren. The July 1st Bacon Fry was a highlight, anticipated each year by a growing crowd of family and friends.

John’s career was with the Peel District School Board, first as a teacher, including years at Caledon Central PS. Later he was a school administrator who immediately built positive, lasting relationships with teachers and parents. In his retirement, John was a dedicated volunteer patient escort and lay chaplain at Headwaters Health Care Centre.

In his later years, one of his greatest joys was his position as a wedding officiant with a non-denominational organization, All Seasons Weddings. During a 16 year period, he officiated at over 300 weddings (including his daughter Rachel’s), the last one in February 2022, days before beginning radiation for throat cancer at Princess Margaret Cancer Centre.

Predeceased by his parents, his brother, Steve, and sister, Roberta, John is survived by Barbara, his wife of 54 years, his children Jennifer (Shawn), Rachel (Will) and Dylan (Sunshine) and grandchildren Sharazade, Rostine, Stella, Weston and Ozzy, as well as extended family.